Federal legislators enacted the Individuals with Disabilities Education Act in 2004 and introduced a new method of academic intervention known as Response to Intervention (RtI) which marked a turning point in special education policy, shifting the focus from accessibility to accountability. Commonly viewed as a reaction to excessive misdiagnoses of students with learning disabilities, RtI represents the culmination of decades of research and advocacy. Connecticut has devised its own model referred to as scientific research-based interventions, or SRBI. Recognizing that this policy is grounded in the work of special education but with broad ramifications on the teaching and learning of all students, the Connecticut Association for Reading Research will be conducting a study on the SRBI model in Connecticut.

Response to Intervention: A Review of the Literature

Emerging from the Individuals with Disabilities Education Act of 2004, Response to Intervention (RtI) represents a national paradigm shift in how schools identify children with handicapping conditions, restructuring the delivery of classroom instruction, assessment, and intervention support services to align with research and scientifically-supported practices. Students with learning disabilities (LD) comprise the greatest proportion of handicapped students, but with approximately 80% of students classified as LD also being described as reading disabled (Lyon, 1995), RtI has broad implications not just for the field of special education but also for general education and reading professionals.

Although RtI represents a federal policy that ostensibly originated in 2004, its roots in American education go much deeper. From as early as the late nineteenth century, psychologists and researchers (e.g., Huey 1908/1968; Orton, 1925) began to study the cognitive processes of reading using scientific experimentation (Berninger, 2006; Reed & Myer, 2007; Smith, 2002), and by the middle of the twentieth century, behavioral psychologists were focusing their research on data analysis and its applications for problem solving in social contexts. Eventually their scope expanded to include monitoring and collecting data on school-based interventions and the impact the instructional setting has on student outcomes (Wright, 2007).

Within this time of developing an understanding of academic achievement and the role interventions play in that process, concerned parents of students who exhibited persistent learning difficulties attended a conference in 1963. Believing that their children were failing to receive appropriate educational services, they approached the keynote speaker, Samuel Kirk, a pioneer in special education. Explaining their desire to form a national organization to advocate for the rights of their children, they sought his advice for a name that would define their cause. Although Kirk did not favor labels, he suggested the designation of “learning disabilities.” Under this umbrella term, these parents united with formidable political influence and set out to achieve legislation that would ensure free and appropriate education (FAPE) for all handicapped children (Berninger, 2006; Hallahan & Mercer, 2001; Kirk, 1976).

The first federal legislation addressing the needs of special education students came with the passage in 1975 of the Education for All Handicapped Children Act (Public Law 94-142), later re-codified as the Individuals with Disabilities Education Act (IDEA), which required public schools to provide equal access to education for children with physical and mental disabilities. Nonetheless, it created problematic situations by failing to delineate specific qualification criteria. Most states complied with the law by adopting the IQ-achievement discrepancy model which identified learning disabled students based on a significant incongruity between IQ and achievement test scores (Fuchs, Mock, Morgan, & Young, 2003).

The Individuals with Disabilities Act of 1977 preserved the traditional definition of a learning disability as “a severe discrepancy between achievement and intellectual ability” (U.S. Department of Education, 1977, p. G1082), effectively institutionalizing the discrepancy model. This criterion would shape identification approaches for the next 30 years.

Despite the work of the federal government to improve services to all students, the landmark report, A Nation at Risk: The Imperative for Educational Reform (The National Commission on Excellence in Education, 1983), condemned American schools for not providing quality education and suggested that the country hovered on the precipice of failure. This indictment set in motion the accountability movement that has pervaded national discourse and legislative policy for decades.

Through numerous reauthorizations and amendments (i.e., 1983, 1986, 1990), federal policymakers retained their emphasis on access to education for disabled students (Hardman, 2006). Meanwhile, concern was growing. Over the course of the two decades of this historic legislation, students classified as learning disabled increased by a startling 200% (Vaughn, Linan- Thompson, & Hickman, 2003) with 12% to 14% of American students currently receiving some form of special education services (Hall, 2008). Of these students, 52% to 70% who were identified at the school level fail to meet state and federal eligibility (Gresham, 2001).

The 1997 amendments to IDEA legislation marked a turning point in special education policy, moving from a focus on accessibility to education to accountability for results (Hardman, 2006; U.S. Department of Education, 2009). Fueled by this perceived lack of accountability to meet the needs of all students, Congress passed the No Child Left Behind (NCLB) Act in 2001, surpassing the tenets of IDEA and usurping state and local autonomy. This legislation demanded the same learning outcomes for all students – regardless of disability.

Building on NCLB’s focus on accountability and scientifically-based decision making (Fuchs & Fuchs, 2006; Kavale, Kauffman, Bachmeier, & LeFever, 2008), the Individuals with Disabilities Education Act of 2004 responded to concerns over misdiagnosis of students with learning disabilities and encouraged states to discard the discrepancy model. The legislation also instituted four main recommendations. First, IQ testing should not be used as the sole criterion for classification. Second, classroom instructional practices should be research based. Third, appropriate instruction relevant to the needs of students must be documented. Fourth, fifteen percent of IDEA funds could be allocated to provide services to students before they are identified with a disability (Hall, 2008; Holdnack & Weiss, 2006; Wright, 2007). Regulations followed in 2006 that strengthened the 2004 position by permitting states to disallow the discrepancy model but requiring them to implement scientifically-based research interventions.

In reflecting on this issue of identifying students with learning disabilities, Frank Gresham (1991), a noted psychologist working in the field of special education, had referred to students who did not respond positively to supports as “resistant to intervention.” During the 2001 LD Summit, he suggested the “children who fail to respond to empirically validated treatments implemented with integrity might be identified as LD” (Gresham, 2002, p. 499). By 2004, the term “resistant to intervention” was altered to the more positive “response to intervention,” and a new policy found its name.

Putting the Framework in Place

The National Association of State Directors of Special Education (NASDSE) defines Response to Intervention as “a practice of providing high-quality instruction and interventions matched to student need, monitoring progress frequently to make decisions about changes in instruction or goals and applying child response data to important educational decisions (NASDSE, 2006, p. 3). Although legislated by the federal government and defined by the field of special education, two identifiable groups advocated for its implementation – behaviorallyoriented school psychologists and early reading researchers (Fuchs, Mock, Morgan, & Young, 2003).

Agreeing on the need to revise current policies and to eliminate the IQ-discrepancy model, behaviorally-oriented school psychologists and early reading researchers differ on how RtI should be implemented. Early reading researchers espouse the notion of following a standard treatment protocol. Although implemented in various forms, one common format is providing group interventions which are based on common student referral concerns and operate outside of the classroom, such as those found in school-based tutoring programs. For example, schools offering interventions that provide the same generic remediation for all referred students exemplify this protocol. While the standard treatment protocol is efficient and can service large numbers of students, it is difficult to customize the group interventions specific to the needs of individual students (Wright, 2007). In contrast, the psychology field promotes the problem-solving model which is based on the scientific model of inquiry and operates within the classroom to offer targeted interventions for individual students. For instance, classroom teachers provide individualized support based on their direct knowledge of each student’s unique needs. This model offers a more individualized approach but requires much more planning, preparation, and resources (Fuchs, Mock, Morgan, & Young, 2003; Hale, Kaufman, Naglieri, Kavale, 2006; Wright, 2007). At this juncture, the problem-solving model is the most commonly used approach.

As an evolving model, there are differing views of the central features of RtI, however, a common thread runs throughout the literature. Predominantly implemented in a sequential, linear pattern, RtI includes the following recognized components.

The International Reading Association Weighs In Having recently formed the IRA Commission on RtI, the International Reading Association released a working draft, suggesting that RtI is a “comprehensive, systemic approach to teaching and learning designed to address language and literacy problems for all students through increasingly differentiated and intensified language and literacy assessment and instruction (“IRA Commission on RtI,” 2009, p. 4). The draft also recommends that reading professionals be active participants in the process and offers six interrelated principles to assist its members in implementing this framework: 1) instruction that optimizes learning, 2) responsive teaching and differentiation, 3) assessment that informs instruction, 4) collaboration, 5) systemic and comprehensive instruction and assessment for all K-12 students, and 6) expertise from teachers and other professionals prepared to teach language and literacy.

A recent survey found that approximately 86% of states are currently developing or implementing RtI in some form to address the needs of their students (Hoover, Baca, Wexler- Love, Saenz, 2008). Connecticut is no exception. Previous state testing results had indicated significant areas of concern: students who entered kindergarten lacked expected literacy skills, reading scores on the Connecticut Mastery Test (CMT), the Connecticut Academic Performance Test (CAPT), and the National Assessment of Educational Progress (NAEP) were flat, and English language learners and students with disabilities continued to perform at low levels (Costello, 2008).

In an effort to improve education for all students as well as specifically to attend to the needs of under-performing students, Connecticut formed an RtI advisory panel in 2006 who developed a model referred to as “scientific research-based interventions (SRBI) to emphasize the central role of general education in the intervention process and the importance of educational practices that are scientific and research-based” (Connecticut State Department of Education, 2008, p. 2). The term was selected because “RtI models are dependent on interventions in which evidence is available to attest to their effectiveness” (Costello, 2008, p. 4), and Connecticut’s SRBI model is not forced to operate within such parameters.

In 2007, Connecticut awarded Bristol, Greenwich, and Waterbury three-year grants to develop best practice sites for the SRBI model. Designed to partner with other school districts as they began the implementation process, these school districts agreed to undertake SRBI prior to the state’s full-scale implementation plan. Meanwhile, the state continued to work on their vision of RtI and in 2008 released their executive summary of SRBI (Connecticut State Department of Education, 2008). Similar to other models, the three tiers of intervention create a comprehensive system of structured supports with increasing intensity and individualized services with special education evaluations occurring commonly in Tier III but theoretically at any tier (see Figure 1). 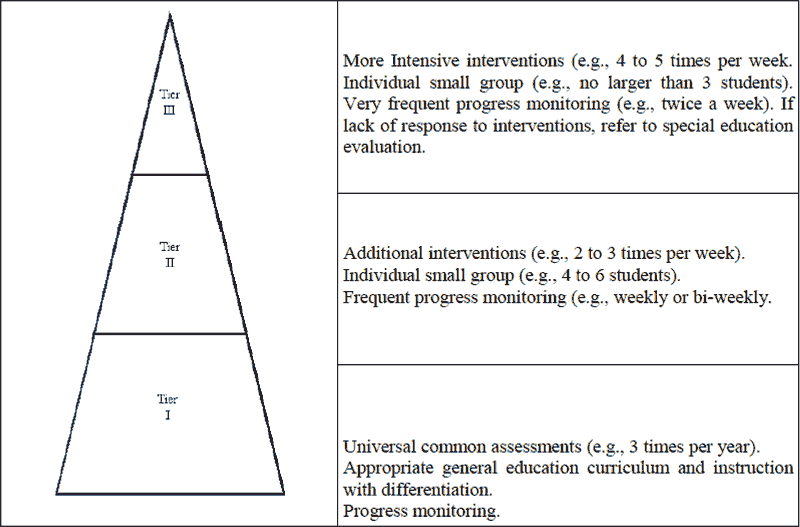 Recognizing the significant restructuring of schooling undertaken by Connecticut’s SRBI model, the Connecticut Association for Reading Research (CARR) is conducting a three-year research study into its implementation process. Over the course of the coming months, researchers will be meeting with focus groups, conducting interviews, and analyzing participant surveys in an effort to describe the performance of the SRBI model within schools and districts across the state. These data should yield a comprehensive report on the status of reform and its implications on teaching and learning in Connecticut.

The National Commission on Excellence in Education. (1983). A nation at risk: The imperative for educational reform. Washington, DC: Author.